A petition was presented to Grove Lodge no. 296, Webster Groves, Missouri, for a recommendation of dispensation, which on September 2, 1873, Grove Lodge voted to grant. This recommendation of Grove Lodge and Kirkwood’s petition were submitted to the October 4, 1873 meeting of the Grand Lodge of the State of Missouri at its annual communication in St. Louis. The petition was approved by the Grand Lodge and on November 4, 1873 Rt. Wor.. Bro. Edward Spencer, D. D. G. M., met with the members of Kirkwood Lodge U. D. for the purpose of establishing and organizing same. This meeting was held in Pittman’s Hall and the Lodge was established in due and ancient form. The officers for Kirkwood U. D. were M. D. L. Buell (Lander No. 8, Austin, Nevada) W. M.; John W. Wade (Lamar No. 292, Lamar, Missouri) S.W.; W. H. Flanning (Joppa No. 29, Patterson, N. J.) J. W.; Theodore Heege (Fenton No. 281) Treasurer; Henry T. Mudd (Bonhomme No. 45) Secretary; Wesley T. Rickart (Grove No. 296) S. D.: Oswald Sturdy (Fenton No. 281) J. D.; and Edward N. Moody (Hiram No. 596, Yarmouth, Nova Scotia) Tiler. The initiation fees were set at $50.00 and dues at $6.00. Meeting dates were set as the 2nd and 4th Mondays of the month.

The early struggle of the Lodge with problems of finance and the seriousness with which the members fulfilled their Masonic obligations are clearly reflected in the minutes.

From 1878 to 1881 the Lodge of Instruction was held in the various Lodge Halls by rotation. When this meeting was held at Kirkwood Lodge the brethren paid for the supper for this meeting out of their own pockets. Frequently during these early years, meetings could not be held as scheduled for lack of a quorum. But the end of 1881 the Lodge had paid off all of its indebtedness incurred in organizing and establishing a Lodge Hall. In 1885 extensive alterations of the Hall were undertaken and new regalia and equipment bought. From April 1, to August 1, 1885, while these alterations were being made, business meetings were held in the second floor front room in the home of Wor. Bro. George C. Grand. During this period degrees for the members of Kirkwood Lodge were conferred by other Lodges, as the Grand Lodge order did not permit the conferring of degrees at the Bro. Brand’s home.

The first Special Communication for the funeral of a departed brother appears in the minutes for March 14, 1886. The funeral was for Bro. William Parks Andrews, and Kirkwood Lodge rode to St. Louis on a special chartered Missouri Pacific train with the body of the brother.

On March 26, 1894, the Lodge first considered buying the log at the southwest corner of Webster (Kirkwood Road) and Adams for the building of a new Temple. Under new by-laws adopted that same year, the first Board of Trustees was elected on June 11th. The Trustees were instructed to invest the Lodge funds pending the final decision on building a new Temple. Electric lights were installed in the Lodge in 1898.

In 1902, a committee was appointed to determine the cost of erecting a new Temple and the rental that could be secured from same. This committee reported at the first meeting in 1903, at which time it was voted to build a new Hall. The brethren were asked to subscribe to the cost of this building, the result being favorable the lot at Kirkwood Road and Adams was bought and deeded to the Trustees of the Hall Association. Work was begun that spring and on May 16, 1903, the cornerstone was laid. Most Worshipful Brother William. M. Hall, who later became Grand Master of the State of Missouri, officiated as Grand Master and gave an address. Grand Secretary J. D. Vincil also spoke. The last meeting in Pittman’s Hall was help on July 27, 1903, after thirty years of continuous meetings.

A special session of the Grand Lodge of the State of Missouri was help of August 10, 1903, with Past Grand Master J. D. Vincil acting as Grand Master and the new Hall at Kirkwood Road and Adams was dedicated to the use of Freemasonry in due and ancient form. Bro. Vincil made the dedicatory address.

In 1906, the Lodge and brethren made a contribution to the suffering Masons in San Francisco, following the earthquake and fire in that city. In 1911, the membership of the Lodge was 88 members. On February 10, 1913, the Lodge voted to serve lunches after each meeting, a custom which has continued to the present day. In 1914, the Lodge commenced the regular observance of Washington’s Birthday with a special program.

March 26, 1917, it was voted to make arrangements to sell the Lodge Hall at Kirkwook Road and Adams. Later it was decided to buy the C. D. Ricker home at 211 North Harrison for a new Temple, and in May the Hall Association took title of the Ricker property. At the May 17, 1921, meeting it was voted to remodel the Ricker property at a cost of about $25,000.00, for Lodge Hall purposes and the Hall Association was authorized to issue four percent bonds to cover the cost. The last meeting at the old Hall on Kirkwood Road and Adams was held on November 14, 1921. 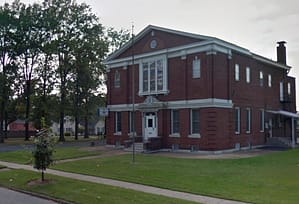 On Saturday, November 26, 1921, the new Temple at 211 North Harrison was dedicated by Most Worshipful and Reverend Brother Corona H. Briggs. November 23, 1923, the Lodge voted to and did buy the vacant lot on the south side of the Temple. The membership at this time was 280 members.

From 1928 to the present date the minutes reflect that Pace and Harmony has truly prevailed as the Lodge has enjoyed a steady growth. Items of historical interest are the celebration of the 55th Anniversary on December 12, 1929. A fraternal visit made by charter bus to Warrenton Lodge No. 609, Warrenton, Missouri , on December 14, 1929. Another such visit made by chartered bus to Harrisburg Lodge No. 325, at Harrisburg Illinois, on June 2, 1931. A similar visit paid to Fraternal Lodge No. 363, Robertsville, Missouri, on October 31, 1933. The 60th Anniversary of the Lodge was celebrated on October 22, 1934. Other fraternal visits were made both to local and outstate lodges, during this same period, but the minutes do not fully report same. One was made to Laclede Lodge No. 83, Lebanon, Missouri. These visits do much to cement the bonds of fellowship both among our own members and with the membership of the lodge visited.

From 1921 to 1945 the Lodge had regularly paid off the building bonds, with the help of donations form the Temple Tyrians and brothers who surrendered their bonds for cancellation without payment. It was quite and event when the last of these bonds was paid in full in 1945. During the summers of 1947 and 1948 extensive alterations were made to the downstairs of the Temple, with the result that we now have a spacious dining hall and a modern stainless steel kitchen. In 1947 the Temple Tyrians also build a storage building on the northwest corner of the Lodge property. In 1948 the Lodge was thoroughly redecorated and painted, both inside and out.

October 18, 1948, our Worshipful Master, Brother Clarence W. Crow passed into the great beyond. It was with heavy hearts that Lodge conducted his funeral three days later. He was our only Master to die in office.

A new Organ was purchased in the same year through the efforts of Worshipful Brother Oscar. H. Jekel. A genuine interest was shown in the project with the liberal money gifts from members and friends of Kirkwood Lodge. Total cost was $1900.00.

Our membership by the end of the year was 472.

Over the years, the Lodge has continued to improve the property. During June 1957, the members removed the wood flooring of the dining room and adjoining hall and replaced it with a concrete floor and at the same time improved the basement by removing rock wall partitions that divided it into sections thus making a large room with a concrete floor.

On October 20, 1963, a Specific Communication of the Grand Lodge was called at Kirkwood Lodge by Most Worshipful Brother Arthur Goodman, Jr. Grand Master for the purpose of convening to the Shriners Hospital for Crippled Children for the purpose of dedicating the same.

The Highlight of each year is Past Master’s Night, the second communication of November each year, with Past Masters in all the stations and places. Oyster stew is the refreshment for this night.

Through the efforts of the Temple Tyrians, the Board of Trustees of the Kirkwood Masonic Hall Ass’n and Kirkwood Lodge, the Lodge room and second floor of the Temple was air conditioned in 1973.

Kirkwood Lodge has thirty five members who have been Master Masons for Fifty Years or more as of the 100th Anniversary Celebration. We will have had thirty-one living Past Masters or affiliated Past Masters at this time.

Through the years of Kirkwood Lodge has continued to grow with a membership of 600 as of September 1, 1974.

At the 100th Anniversary Celebration, a Church Service on Sunday Afternoon at the Geyer Road Baptist Church, followed by a Reception at the Lodge Hall. A dinner for members on Monday, October 13, 1974, with our regular stated communication the same evening with the guest speaker, Most Worshipful Brother Herman A. Orlick, Grand Master. A dinner Dance at the Le Chateau Restaurant of Friday Evening, October 18, 1974.

Throughout the years of our existence Peace and Harmony has truly prevailed. The part our membership has played in the civic affairs of Kirkwood is too long to be told here. Our deeds and real life exemplification of the true spirit of Masonry best speak for themselves.